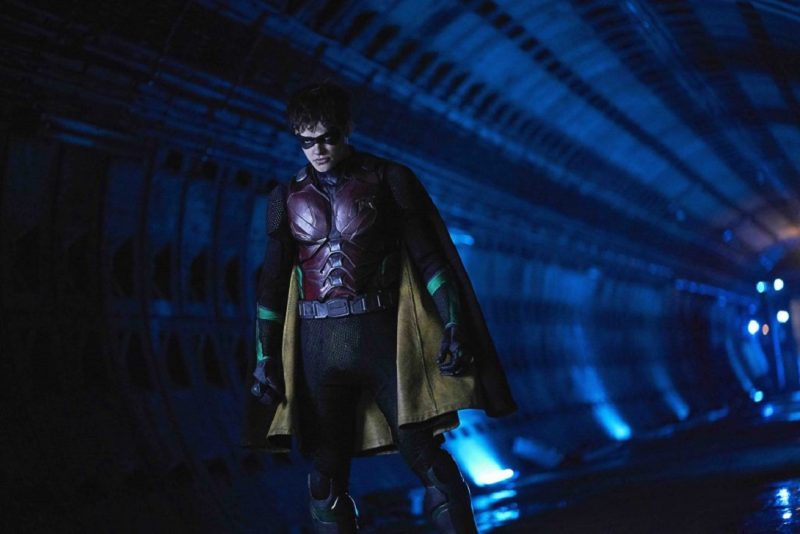 An incredibly apt title for this latest episode, as the ghosts of the past dominate the episode in a big way, proving old scars never truly heal. At least, not for costumed crime fighters they don’t. Whilst Tom Pabst’s screenplay doesn’t spell out the events of the past, it certainly drip feeds little tidbits here and there, hinting at a past tragedy that split up the founding line-up of the Titans and sent them on disparate courses. The theme of the past is one that is seemingly set to guide the season, be it the Bruce/Dick relationship, the Wilson family conflicts or the inter-group relationships of the titular team. The biggest glimpse of the past this week is a blink and you’ll miss it memory of Donna’s, depicted as some kind of birthday party in Titans Tower. It is a certainty that some of the participants are not part of the group now, but who would’ve been there? Aqualad is a certainty based on upcoming episodes, but who would fill the remaining two empty costume slots in the Tower? Surely Roy Harper (confirmed to exist in this universe) and Wally West, right?…..

In a move destined to satiate the Nightwing fan base, the first glimpse of Dick utilising his stick fighting skills was a great example of Dick Grayson’s fighting prowess. Acrobatic and fast, his sparring session with Rose Wilson was a real treat. The fight choreography on the show has always been excellent and this scene continued that high bar. Whilst a far cry from Dick being in the costume (it’s coming) and wielding purpose built eskrima clubs, this is a proto Nightwing fight scene, the first of many more to come. Appetite whetting stuff indeed!

I find the “less is more” approach to featuring Slade Wilson thus far to be a correct choice. Painted very much as somebody to be feared, I like the fact that his appearances have been fleeting to date. There is truly a sense of impending doom around him. Revealed to be in collusion with Dr Light, Esai Morales’ slow, deliberate delivery of his dialogue is spot on for the character, a combination of intelligence and just below the surface violence. His plan is pure Wilson too, as he is looking to divide and conquer over our heroes, splitting out the weak and taking the pieces off the board one at a time. This interpretation of the character is shaping up to be the best yet. If that were not enough, the first full look at the character in full Deathstroke regalia was a sight to behold!

Jason Todd had a significant amount of screen time this week, for a fleeting moment I thought the end of this episode was about to give us the DC Universe version of the “A Death in the Family” story line. Whether the show does go down this path at a later date remains to be seen, but it is a distinct possibility based on Jason’s ultimate destiny. Curran Walters has done a superb job with the character, making him fundamentally unlikable, cocky and brash. Yet, there is a wide-eyed, eager to fit in air to the character underneath the bravado. Walters projects Jason’s need to be part of the team, despite being knocked back by Dick, who remains his physical and mental superior, the Robin he aspires to be. It is that desperation to succeed that puts Jason in Slade’s cross hairs, act one of his master plan. A victim of his own ego, I can’t wait to see the long term effect on Jason from this point on.

The overall work from the showrunners, directors and writers on Titans has been top drawer. Their approach is so effective, with no wasted minutes on the screen. When considering the amount of principal characters involved, the show is expertly taking its sweet time, building up slowly and creating a rich tapestry. With so many big characters still to debut this season, the future is very, very bright indeed. This is a show that gives the fans what they want, made by people that respect and know the source material. Characters feel three dimensional and fully formed, the dialogue is realistic and natural and the high concept of the show never feels ridiculous. The world that has been created feels real, not one that is far removed from real life. In a world of hits and misses, this is a huge hit and a treat for long time devotees and new recruits alike.