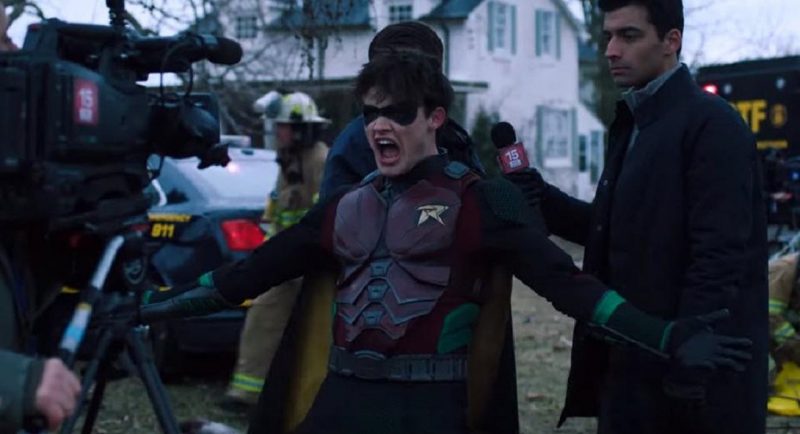 “Titans are back, bitches!” Yes, the crown jewel of the DC Universe streaming service has made an extremely welcome return to our screens. In the 9 month time period since the first season finished airing, anticipation for its return has reached fever pitch, with the announced castings of iconic DC characters such as Bruce Wayne and Slade Wilson only helping to throw more petrol on the fanboy fire.

Following on from the somewhat abrupt ending to the final episode of season one, albeit one with one hell of a cliffhanger, this episode had a lot of ground to cover. Not only did it have to resolve the conflict with Trigon, it also had to set its stall out for the forthcoming season in terms of foreshadowing what is to come? Did it achieve those goals? Yes it did, but with a degree of room for improvement.

So, after establishing Trigon as a demonic, unstopppable force of darkness, his exit from the show (at least for now) was something of an anti-climax, as was the long awaited transformation from the human facade of Seamus Dever to the true form of Trigon. Whilst pretty faithful to the source material created by Wolfman/Perez, with all four eyes present and correct, the giant demon was made somewhat less terrifying due to the poor job done realising the character with CGI. With graphics that wouldn’t be out of place on the Playstation 2, this iconic, terrifying character unfortunately lost a bit of his sizzle. In addition, the short order in which Raven disposes of her father was a bitter disappointment. Having built the character up for several weeks, it would have been fitting for all the assembled Titans to have to pool their resources in order to topple the beast. Instead, we got a very brief familial fracas. What that did achieve though, was showcase just how powerful Raven has now become and how formidable she will be moving forward.

Wrapping up that arc in a pretty little bow, the tone and tenor of the show took a massive shift. With that opening section bathed in washed out, pale hues, the demise of Trigon saw the dialogue get more snappy and positive and the look of the show become more colourful. Very much a tale of two halves, I actually found the change to be quite effective. Kudos to the directorial choices of John Fawcett here, as he worked well with two very different sets of material.

The casting announcement of Iain Glen as Bruce Wayne was met with a very divisive reaction. Some embraced the casting choice, with others pointing to his age, nationality and fair haired appearance as sticking points. My personal opinion has always been that the proof is in the pudding, and that particular pudding was served up here by way of a quite wonderfully written scene as a repentant Dick journeys back to Wayne Manor to clear the air with his mentor. The exchanges between Glen and Brenton Thwaites were filled with warmth and affection, as the mutual respect and long standing history between master and pupil really came to the fore.

Glen’s performance was full of charisma and control, he really came across as a fitting Bruce Wayne. No longer on the fringes of scenes, the character will hopefully play a big part in proceedings from this point. Yes, Glen looks every one of his 58 years which does make the timeline chronology a little muddled. For a still active Batman that is a member of the Justice League, with Dick and Jason being the age they are here, the character should be depicted as a decade younger than this iteration. Ignoring such quibbles and taking the performance on face value alone, I think this portrayal of Bruce Wayne is excellent. Whether we see him get physical further down the line, or indeed don the Batsuit remains to be seen, but the character is a hugely welcome addition to this loaded roster.

Speaking of welcome additions, we also got a glimpse of Deathstroke himself, Slade Wilson, as depicted by Esai Morales. Even with brief screen time, Morales looks every inch a Slade Wilson, a more faithful depiction than previous live action efforts, great as they were. A virtually silent cameo, Morales accomplished a lot with very little. Shown as unkempt and out of the game, living in isolated retirement, Wilson is stirred back to life by media coverage of the resurrected Titans group. There is such a rich backstory to be mined from, the coming weeks should be a real treat for us all. Topping my particular wish list is a Wilson/Wayne face off, with the ageing veterans coming face to face for one final punch up!

Overall, this was a very strong return for Titans, despite the flaws of the opening half. Whetting the appetite for future events, this DC Comics fan’s utopia shows no sign of second season fatigue. With the likes of Superboy, Aqualad, Ravager, Jericho and Krypto still to make their season debuts, the outlook is very, very good. With that thumping theme music still guaranteed to get a viewer jacked up and ready for action, it seems as though the high bar set by season one shows no sign of being lowered.