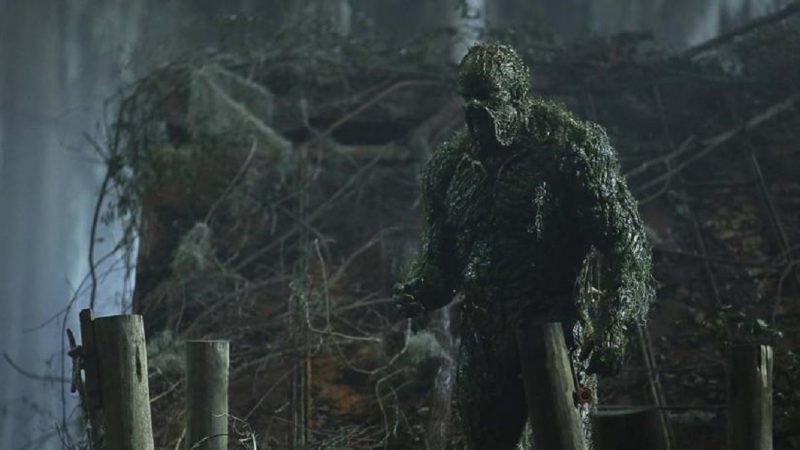 Despite the ill-timed news dropping this week, confirming the cancellation of Swamp Thing before its first season, this second episode was wonderful. Building on the flawless groundwork laid by the pilot, Worlds Apart managed to continue the evolution of Alec Holland into the titular creature whilst at the same time expanding the world of the show. Introducing several key characters from the world of DC Comics, and rolling out more backstory for Abby Arcane, it just felt big. Big in scope, big in ambition and big in quality.

Picking up where last week left off, Holland’s transformation is complete. Arcane is struggling to come to terms with his demise and just what she saw down in the swamp. Crystal Reed’s performance was strong yet again, utterly convincing as her character ran the gamut of emotions. Whether it be reliving the trauma of the past with Will Patton’s sinister Avery Sunderland, leaping into action to search for the missing girl, Susie, or mildly flirting with childhood friend Matt Cable, she was given a bit of everything to do. With Andy Bean’s Holland not likely to pop up much during the rest of the season, Reed will be carrying the load as the central character. The story arc should see her put through the wringer, so a good actress is essential. Based on the first two episodes, the show is in good hands.

As I mentioned earlier, a whole host of characters got their full debuts here, all of whom made a solid impact and set their stall out for future events. Starting with Jeryl Prescott as Madame Xanadu, here depicted as a blind fortune teller with psychic gifts. Her scene with Virginia Madsen’s grieving Maria was electric stuff, laced with tension and a sense of other-worldly goings on. Both actresses were at the top of their game, making for a captivating watch. The final scene with Maria at home with her “daughter” hints at crazy stuff to come!

Genre favourite Kevin Durand made a splash as Jason Woodrue, who comic readers will know has a somewhat florid future coming up. Durand typically plays physically imposing characters, as seen in The Strain and X-Men Origins:Wolverine, but here flips the script to play a nebbish, cocky scientist. Pride comes before a fall, and Woodrue is going to fall into some very interesting changes, but let’s leave that there for now. Another mention has to go to the introduction of Daniel Cassidy, best known as the superhero Blue Devil. To think that we live in a world where such an offbeat character is getting the live action treatment is such a treat. Played by Ian Ziering, star of the Sharknado franchise, Cassidy here is a failed actor, living off past glories and running the local video hire store. Only in the one scene with Arcane, there will undoubtedly be more to come. Ostensibly a nice guy, there appears to be something a bit off kilter about him, and with what will hopefully be in store for the character, he should give everybody a devil of a time….

The final scenes of the episode, of course, give us the money shots. Mixing gore, suspense, heroism and a dash of poignancy, a masterful job was executed here by director Len Wiseman. Seeing Holland somewhat confused and half crazed by his new existence, yet still driven to protect an innocent child from danger, sums up the juxtaposition of the character. Monstrous in appearance and brutal in method (see the explicit demise of the heavy in pursuit of Susie), yet heroic in mind, the creature is a “muck encrusted mockery of a man”, for sure, but still a man. Retaining Holland’s personality, he is driven to do the right thing. Seeing the practical effect of the suit in all its glory was a feast for the eyes, seemingly lifted straight off the comic book page. In this age of fully CGI-rendered characters, this old school approach is refreshing and striking in equal measure.

Despite its cancellation (hope springs eternal that things can change), I cannot wait to see how the season plays out. There are so many questions already raised that I just need to have answered. How are Susie and Swamp Thing now connected? What was Abby’s part in the demise of the Sunderland’s daughter? What is behind the curtain regarding the Sunderland’s organisation and their involvement with Woodrue and his accelerant? And, is cuddling up to your undead daughter a good idea?