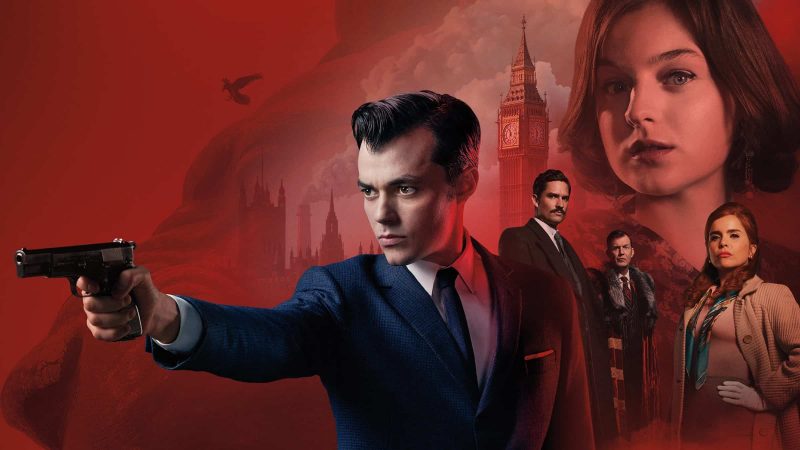 All ten title episodes of Pennyworth are intriguing and this episode titled “Martha Kane” had me excited to see another character from the pre Bat universe on screen. Bruno Heller has again written the episode but we get a familiar Gotham Director Bill Eagles bringing this episode to life.

What do we actually know about Martha Kane? Well she is the future mother of Bruce Wayne and wife of Thomas Wayne. History in the comics gives us very little background apart from the Kane’s like the Wayne’s were one of the wealthiest families in Gotham.

Pennyworth I feel now is moving along nicely in giving us some interesting story arcs and characters. Alfred Pennyworth (Jack Bannon) is certainly dealing with new obstacles in his life. Normally by the third or fourth episode I certainly know what I like and don’t like about a new show, and Pennyworth is no different keeps me interested and engaged until the end titles. The opening theme music definitely needs a mention as it’s catchy, modern and suits the style of the show.

Alfred himself, with Bazza ( Hainsley Lloyd Bennett) and Dave Boy (Ryan Fletcher) are definitely a highlight of the show. In this episode we get to see more of Bazza and Dave Boy and how they are individually dealing with their own PTSD. The flashback we do see in this episode is of the three of them in the jungle, Alfred is carrying an injured soldier over his shoulder. Dave Boy is certainly hitting the booze more then Bazza at an evening poker game he is a drunken rage where one of Bazza’s mates pulls a gun on Dave Boy. Calling his bluff Dave Boy takes the gun away from the man, throwing it back to him and not knowing the safety is off it kills him. Bazza doesn’t involve this incident with Alfred and is upfront and honest with Dave Boy that his drinking has got out of control. In a scene which is well acted and heartfelt of a broken man who admits he doesn’t want to die, “I’m just passing the time.” Bazza who has better control over what he may be personally dealing with still stands by Dave Boy and help him leave the club.

Martha Kane gives Alfred Pennyworth an opportunity to earn serious money. Martha knows who Alfred is but introduces herself as a photo journalist. When asked by Alfred does she know Thomas Wayne, Martha denies that she does. I honestly don’t believe this to be true but I am sure we will find out in future episodes. Martha doesn’t waste time and tells Alfred the details of his security services as a driver, specifically a man wanted for homosexuality to be taken to an airport. Alfred accepts the job and arrives at a police station. The man Martha is trying to get released is there and has been arrested. Martha intends to impersonate his lawyer to Alfreds horror. In a fantastic line from Martha “they carry briefcases and act like assholes. I think I can pull that off.” and she certainly does as Martha superbly intimidates the officer to release Ian Thurso (Sam Hoare). Sam Shay (George Parker) is also released from the police station he is Ian’s partner and decides he doesn’t want to be separated from Ian. Martha making it clear that the ‘computer’ Ian has invented must not fall in to the hands of the Raven Society. It’s fair to say that the Ian Thurso story does have similarities to the real life Alan Turing story as a code breaker at Bletchley Park in World War II.

After arriving at an abandoned American Air Force base, Alfred wants no more secrecy and demands to know who Martha is working for. Confirming she works for the No-Name League, which we know exists as the Prime Minister confirmed its existence in the pilot episode. The action sequences in Pennyworth are fantastic and this scene alone watching Alfred use a fuel tanker to make a path way for the airplane to take off as Martha sets the fuel alight.

Back at Martha’s apartment she pays Alfred in full the £10,000 he is owed. Alfred now has a permanent position as Martha’s driver, but he makes it clear that he doesn’t support the No-Name Society. The money is good and this is an opportunity for Pennyworth Security to make connections in future business.

The opening of this episode returns to The Tower of London, where Lord Harwood (Jason Flemyng) is continued being tortured for the name of The Raven Society. A barber is sharpening a blade on a leather strap as Detective Inspector Aziz ( Ramon Tikaram) pays Harwood a visit. Leaving with no more answers Aziz is being watched by The Prime Mister (Richard Clothier) smoking a cigar in the shadows.

The episode also ends with Lord Harwood being dumped on an abandoned road. The barber has removed the tip of his nose.

Stood waiting in a place of grandeur Alfred is shown through to finally meet Esme’s father. Dean Evelyn Winikus (Jasper Jacob), Alfred wants to do right by marrying Esme and asking for her father’s permission. Within minutes Dean Winikus naturally wants to know more about Alfred. He believes an army career can harden a man bring out the brutality in him. Alfred doesn’t disagree but believes a man can change.What is so interesting about this scene Esme’s father believes she is only interested in the killer and dangerous side of Alfred. You can also possibly see why Esme has delayed Alfred in meeting her father and distance herself from him. Winikus has already decided that Alfred’s upbringing, having parents in the service industry is not good enough for his daughter as she is an heiress and will in inherit everything. Alfred decides to accept defeat and keeping his polite manner thanks Dean Winikus for his time and leaves.

Naturally an argument happens between Alfred and Esme as he doesn’t feel she told him everything especially being an heiress. Esme’s anger towards her father is also a mix of frustration to the point that Alfred is concerned about her cursing outburst about her father. I am not sure about i actually like this relationship anymore, as perfectly lovely as Esme is I don’t feel after the scenes in this episode she is right for Alfred. Esme ends their engagement by slamming her ring down on the bar.

In a conversation with his Parents, Alfred reveals more about what life has been like growing up in the Pennyworth household, there have been some domestic abuse from his father on his mother. This is triggered after his parents are proud that his business is finally working but Mr Pennyworth thinks Alfred is trying to make himself better for Esme.

Waiting for Esme and managing to persuade her to come on a bus ride with Alfred, he takes her to a beautiful apartment. Alfred has paid 2 years rent up front. Esme reminds Alfred they are not together anymore because he didn’t come after her. I think by the end of this scene by Esme’s smile herself and Alfred are engaged again.

Thankfully we are not without Bet Sykes (Paloma Faith) in this episode. After her sister Peggy Sykes (Polly Walker) rescued her from a hanging at The Tower of London. Peggy knocks on a door of an unknown house where an older woman answers. Peggy asks for LuLu, which a man appears. Whilst eating in their kitchen Bet is desperate to go back to London as she feels trapped like a caged animal back up north with Peggy. Bet thinks it will be romantic when Esme realises she is still alive, but her sister can see Bet is infatuated with Esme. Bet can definitely be creepy, weird and unpredictable, Paloma Faith is fearless in her performance and has definitely become a character that will remain unforgettable in the DCU.

Will next week episode be Thunderbirds related as it’s tilted “Lady Pénélope” Alfred and Martha Kane take a train ride into the countryside on an assignment, while tragedy strikes in London.