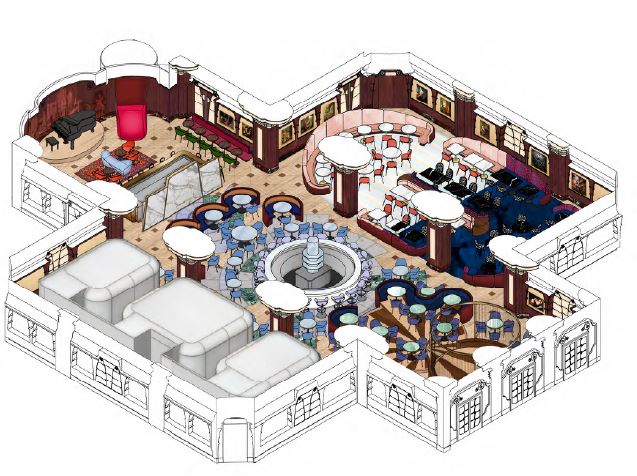 Planning applications have been submitted to the City of Westminster local authority for works to an existing restaurant in London. The applications look to undertake alterations and new restaurant fit-out to this beautiful Listed Building. They also propose a change of use to parts of basement levels that will become restaurant use in connection with the existing. It may well be asked why we are reporting on this. Well as the title suggests, this will be a high-end restaurant, “rooted within the DC Multiverse”. Oh yes.

I became aware of this proposal a number of weeks ago and my interest in this is two-fold. One, I am obviously a huge DC Comic Book fan. Two, I work in the planning department oy my own local authority. When I decided I wanted to write this article, I gained permission to be able to use snippets of text and images. My thanks go to the applicant for that permission.

I must also state that this is something I could write and write about. However, to ensure people who may read this don’t get bored, I will keep it as short as possible because I believe that all DC fans should be interested in this.

Part 1 of the Design and Access Statement gives us this overview of the proposal:

‘The proposed design continues the use of the space as a high-end restaurant. The restaurant will be rooted within the DC Multiverse, taking visitors on a culinary adventure through the many fictional Universes famous for their superhero residents such as DC Multiverse is heavily influenced by the Art Deco period with the style prominent within its publications and film and television work. The restaurant will not be a ‘theme park’ with literal sets and costumes from the franchise, but it has the intention to invite guests to experience the DC Universe without breaking the fourth wall- the imaginary wall that separates the audience from the performance.’

The applicant also goes on to say that ‘The Art Deco movement and the works of Oliver Bernard heavily influence the look and feel of the restaurant’. Oliver Bernard was an English architect and pioneer of the Art Deco movement and this look and style of this building is heavily influenced by his work. ‘The theme and style of the proposed restaurant compliment the existing site. ‘Reflecting Oliver Bernard’s work, the design
will be a contemporary interpretation of the Art Deco period. This approach will evoke a sense of atmosphere prevalent in DC and the Titanic Bar without resorting to pastiche, encapsulating the Art Deco ethos of endless possibilities- progression and forward movement of time.’

From the documents submitted as part of the applications, it is easy to see that a lot of research has been conducted by the applicant. Not only have they researched the works of Oliver Bernard, but they have delved in to DC Comic Book/Movie/TV history.

At the heart of this proposal is an area that the called DC World, as the layout plan below shows. This area is currently known as the Titanic Bar. With these proposals we will see it become different areas all influenced by the style of the DC Multiverse.

Pennyworth’s – On entering, visitors will be welcomed to this lounge style bar. Inspired by the design of Oliver Bernard, this area will ‘reflect the characteristics of a classic 1930’s bar’. Influences for this area come from comic book illustrations of Wayne Manor along with the study as seen in the TV show Gotham.

Iceberg Lounge – Sitting just beyond Pennyworth’s, the Iceberg Lounge will be a sculptural feature. Again, the influences of Oliver Bernard are in place. As all fans of DC Comics will see on viewing the documentation, it’s easy to also see influence from Superman’s Fortress of Solitude. The use of ‘translucent materials and lighting to add drama and focus to the space’, will be a great addition.

Immersive Dining Experience – This is one part of the development where the statement from the applicant should be used. Suffice to say, this appears to be quite outstanding with a DC influence of the dome covered Argo City.

‘Reflecting the bays on the ceiling of the smaller aisle, 3no. structures at a height of 3m, will be created to provide fully immersive dining experiences. Internally, the dining experience is amalgamated through high-end immersive technologies. Creating bespoke enclosures will retain the sense of surprise for the guest and will not affect the existing Art Deco style in the space.  The independent structures float in the space and are set away from the ornate ceiling.  The design ensures clear views throughout the entire space with all MEP requirements accessed via the floor. The boxes are connected by a continuous backwall, which has two sliding doors, unifying the appearance and giving access to the waiters from the nearby kitchen.  Inspired by the existing doors and their reflective panels and along with original Art Deco characteristics such as smooth lines and geometric shapes with decadent polished, high shine finishes- the enclosures will be clad in a mirror like material. The modern structures will reflect the original interior and lively scenes within Iceberg Lounge making a feature from the activities and environment playing out around it.’

Arkham – This part of the development will create a whole new dining area within the restaurant. It will be based on the Arkham Asylum, a feature of the Batman mythos. This give a completely different dining experience and the industrial feel to it will give guests a whole new atmosphere.

These do not tell the whole story of the development being proposed. If you throw in the Circulation Core with a Wayne Manor water well influence, the ante-chamber and it’s Batman Returns influence and hanging decorating elements akin to that seen in the Batman tv series and Tim Burton’s Batman from 1989 – then we have what will become something unique.

What I have written above gives a bit of an overview on what is proposed by the applicant on this planning application. Anyone who looks through the planning application online will see that there is such a wealth of information available for public viewing.

My own thoughts are that the applicant has given a lot of consideration to all aspects of the works they wish to carry out. They gone to great lengths in researching the DC Universe and the works of Oliver Bernard. More importantly, they have given careful consideration to the impact any development may have on the Conservation Area that the property falls within, and the Grade II Listed Building itself. The works they wish to carry out on the building are such that they do not have an adverse affect on the heritage asset. Now, I have no idea on the policies in place within the relevant department at Westminster City Council. However, on reading through the documents it appears that the applicant has ensured that the development fits within those policies in place.

If given planning approval (a decision is due very soon), then this will be a must for any person who enjoys the worlds of DC Comics. Having spoken to the applicant, they are looking for this to be a chance to experience the world of DC like never before. Think the Gotham City of Batman: The Animated Series, or that of Batman ’89 and beyond. This will give you some idea of what is being proposed. This is not a themed restaurant but something that gives you the experience of feeling part of the DC Universe.

I for one, will be keeping a close eye on developments with this and I hope to speak again with the applicant once a press release, following an approval, is released. I am also hopeful of a future visit once works are complete. Keep a close eye on the site as updates will be published as an when I get them.

If you want to take a look through the whole application, then you can do so by visiting the Westminster City Council website here.

Finally, my thanks go to the applicant for giving me their permission to report on this and to use snippets and text from the application documents, even though only a minimal amount have been used. I hope that an approval is forthcoming and a follow up article will follow.

Any thoughts on this? Then please let us know below or on our social media pages. Hoping that this may give rise to a=some good discussion.