As always Alex Knight will be weekly posting Comic reviews to share on the latest DC Comics titles and Rebirth issues. Here are some of this weeks and feel free to comment below. 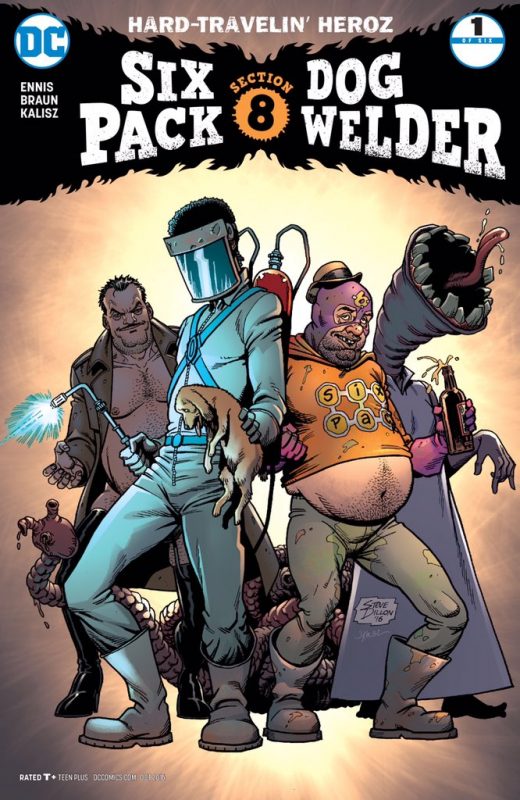 Amongst the glut of rebirth titles it is admittedly strange to see a book being released as though it were still in the 2000s, prior to the New 52. Six Pack and Dog Welder is a follow on title from last year’s All Star Section 8, in turn a spin off from the popular series ‘Hitman’ by Garth Ennis and John McCrea. This series follows the lives of literally the worst heroes ever, a raging alcoholic with a heart of gold and delusions of grandeur (Six Pack) and Dog Welder, who…. welds dogs to people. Six Pack is considered the leader of Section 8, whose current task is to find a suitable mission for the group. Not withstanding the fact that there is not even a full roster of the sub -standard heroes…

Garth Ennis seems to have been given free reign in these miniseries, and that is clear to see in both the tone and how every character behaves. Veering from trademark pitch black comedy to solemn tragedy at a hairpin notice, fans of Ennis’ previous work will not be let down in this issue. It isn’t the most accessible for new readers but it appears as though that is the intention. Whilst Rebirth was an attempt to bring both new and old readers, Six Pack and Dog Welder is unapologetically for readers in the know. If you are in the know, this issue his all the right notes.

Art is provided by Russ Braun and colours by John Kalisz. Following on from John McCrea in a suitably grimy and gritty way, the surviving members of Section 8 rendered as the scumbags they are. In a suitably 90s/early 2000s fashion, the superheroines in contrast are portrayed as strong but attractive. This works perfectly as whilst Six Pack is lamenting his current situation the women are simply having a girl’s night out in the scummiest bar in Gotham. This all beings to veer wildly off course as a mysterious stranger arrives and the conclusion of the issue is brought to a head.

It’s fantastic that Ennis and Braun are back at DC and this miniseries brings back all the favorites. It’s no secret that Ennis had a general disdain for capes, and it’s fun seeing how out of character he writes Starfire just generally to draw fun of of them. I’d heavily recommend anyone with even a passing interest check out Hitman and All Star Section 8. This miniseries should be a treat, so check it out. 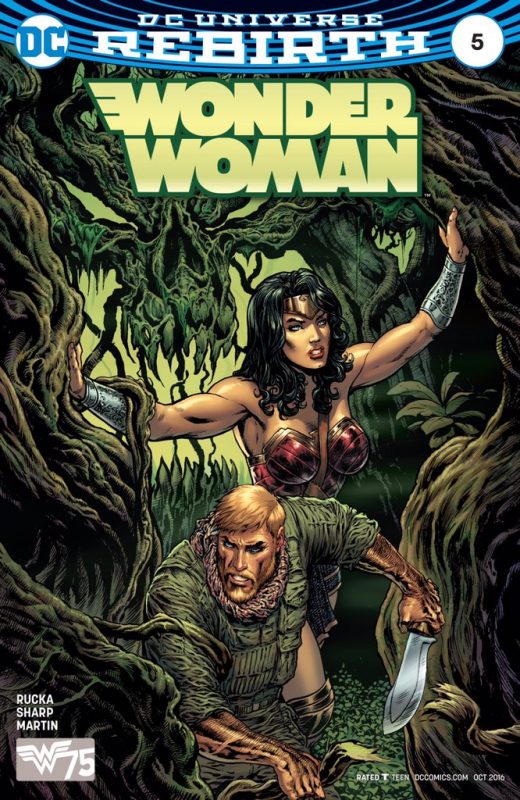 Greg Rucka and Liam Sharp bring the lead up to bigger and dramatic things in Wonder Woman #5. Creepy horror lurks at every turn when Steve Trevor gets chosen as a cultist plaything as Diana and Cheetah still to locate the source of why exactly she’s been locked out of Paradise Island. Meanwhile, Etta Candy seeks out a long lost friend to help locate Steve and Diana.

Rucka accelerates the proceedings again after a slower issue last month, whereby second-act exposition is delivered enticing everyone towards the end goal. All may not end in a fully clear fashion, but it would be disputing if all the cards were shown. Significantly moving on from the New 52 era aspects of both lead cheaters, Steve no longer feels like a bit player appealing more as an actual military leader than a lovesick lackey for the main woman. Both characters also display their fair share of lament with optimism for the future, which one would suppose is not only a metaphor for their relationship generally but also a commentary on how Wonder Woman had been treated since the not-quite-reboot 5 years ago. Whether the metatextual comment is accurate or not it’s one that many are likely to share.

Liam Sharp absolutely dominates on the art front, being creative with panels and empty space and incorporating them with visceral horror. The portrayal of the big bad echoes a sinister reflection of everything the Amazon represents. Their culture is primitive and based around masculinity, their lair is situated in dark tunnels and they revel in the dark. The level of detail sharp brings to each page helps focus the action and dialogue, heavy steeped in earthy browns and greens thanks to colourist Laura Martin.

Wonder Woman is continuing is fine run of form with Rucka at the helm, and the next entry of ‘The Lies’ should be another sold entry into Wonder Woman’s modern golden age.