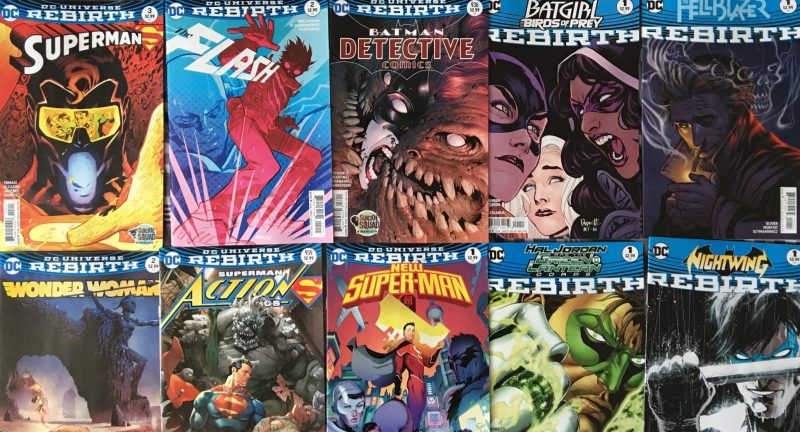 As always here are the DC Rebirth Comic book reviews from Alex Knight who can be also found on Twitter @apknightable . 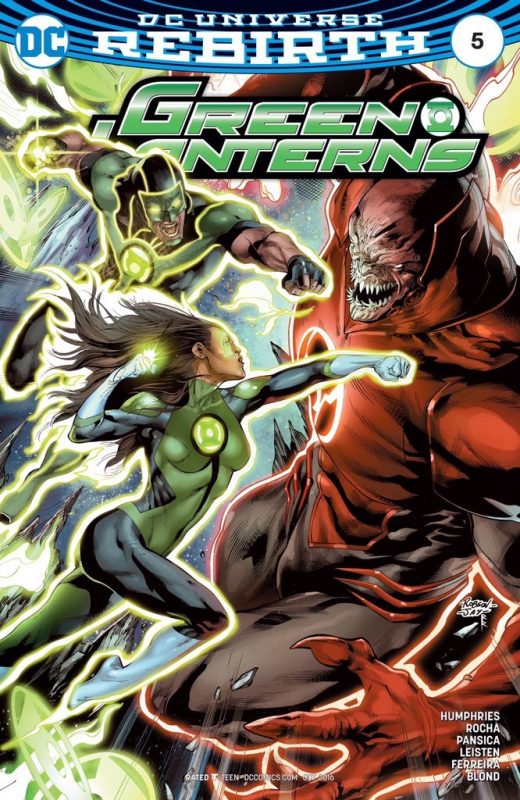 I suppose it can probably be considered cheating to continually review a book I’ve stated from the outset I enjoy, so I hope you take my review with a natural amount of bias!

With the Red Lanterns infecting more and more people across the world, the only heroes up to the task are rookie Green Lanterns Simon Baz and Jessica Cruz. After digging themselves out of a literal hole in the ground in the previous issue, how will the hilariously unprepared earth-bound wielders of the rings repel Atrocitus and his horde? If you want to find out you have to read this issue!

On art duties is Robson Rocha and Eduardo Pansica, with inks by Jay Leistein and Julio Ferreira. Rounding off the issue is Blond on colouring, who must have one of the most enjoyable tasks in comics with enriching a comic that is literally about the color spectrum. The art stable is actually more consistent than previous issues and it shows, with splash pages that show off the ferociousness and fear each character displays.

Story-wise, one of the pleasures Green Lanterns has brought is how it makes full advantage of the modern comic structure. Whilst arcs are commonly now five issues for trades, with a bimonthly schedule this compact release cycle usually allows writers to either pack a lot of story in a short space of time, or to have relatively simple stories as a base to build character interactions and have fun with small details. Sam Humphries is definitely doing the latter and clearly having a blast with fleshing out Simon and Jessica, and it’s going to be in my pull list as long as the book is this good!

Starting a story media-in-res (in the middle of the story) is always a bit risky. It’s a bold move, trusting your audience to believe it hasn’t accidentally missed an issue whilst sticking them in. With this issue straight from the outset one had to question: did Nightwing let a child die? What’s going on? Well, much like most things in life you need to understand the context. If you want that you’re going to have to buy the issue!

Tim Seeley allows himself to experiment in how he weaves Dick Grayson, Barbara Gordon and Raptor together in their (maybe?) fight against the Parliament of Owls. Yet again each character’s voice of intent is played to perfection, with Babs acting as a voice of control and caution, Raptor as the arrogant potential mentor and Dick caught between the two. The banter is great as usual, evading the trap many writers fall into where each speaking person sounds the same. If you’re already invested in this story, there is no reason to drop it at all.

Javier Fernandez and Chris Sotomayor continue their ongoing case for being the art team for both Nightwing and a Batgirl book by rendering them both impressively well. Punches and hits have weight, but possibly the most understated aspect of this book so far has been the pale background colours in contrast with the sharp boldness of the main characters. This ensures that from scene to scene each subsequent page changes the mood instinctively.

Nightwing is still a part of a greater whole with Seeley laying down changes sometimes in abrupt ways and others being more gradual. Nightwing #3 is another surefire keeper for your pull list. 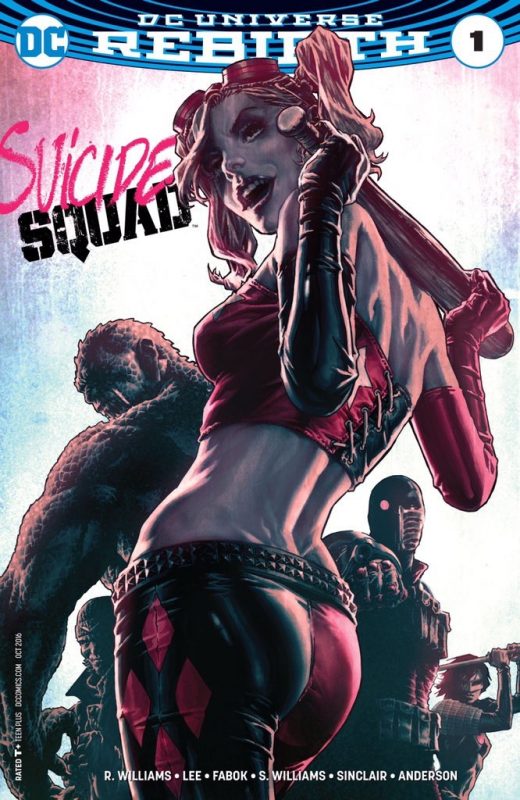 It’s got to be a bit surprising to those even within the comic community that this
weeks biggest release was Suicide Squad. Writer Rob Williams, fresh off the critical success that was Martian Manhunter, writes the bad bunch forced to be good. He’s joined by veritable superstar artist Jim Lee for the main story and house staple Jason Fabok for the backup stories.

Unsurprisingly there’s a lot of movie synergy occurring throughout, starting with the main lineup of villains being: Colonel Flagg, Harley Quinn, Deadshot, Killer Croc, Katana and Boomerang. Oh and June Moon, who for some reason isn’t identified as The Enchantress. It’s certainly an introductory issue for the main cast, with their Director of Operations being the indomitable Amanda Waller, providing narration that confirms just how badly she believes in the necessity of Task Force X. Whilst a lot of exposition is necessary you can’t help but feel that it drastically gets in the way of the central narrative, and the risk is that in further issues the characters get centralised, negating any tension or drama.

Ultimately that may be a cause of Jim Lee’s work rate, as the main man has drawn 14 pages of this week’s issue. The result is that the art looks a little sub par for an artist of his calibre. And whilst a rushed and slightly off art is usually a major turn off for a book, when Jim Lee’s art is off and rushed it’s still very impressive. In a strange way Lee is upstaged by the support art from Jason Fabok, the maturity and dark colours shining through in contrast to the bright and peppy show as a different layer to the book. It’s very clear-this book is made to draw in new readers whilst retaining the ability to go dark when it wants to. That’s a fantastic approach and I’ll be keeping a keen eye on how it progresses. 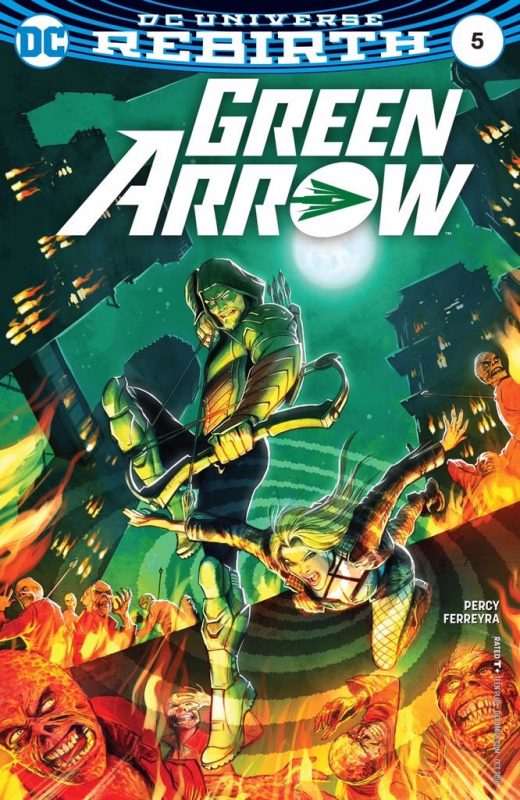 Green Arrow finally faces of against the Ninth Circle as he attempts to save Black Canary, his half sister Emiko and his fortune with the aid of his former bodyguard John Diggle. Will he succeed or will the bad guys with facial disfigurements as part of their uniform succeed? Put like that I suppose it’s probably not to difficult to guess.

Benjamin Percy brings a crescendo to this story that combines the best of Bond, Indiana Jones and 80s action films. Infiltrating clandestine groups, double agents and fantastical action mixed with personal drama. These cliches would normally be awfully easy to make cheesy, but Percy instills a buoyancy in the characters that completely absorbs and embraces the lunacy.

Juan Ferreya provides the art and displays control on paneling, layouts and colouring that is simply stunning. One factor that is worth pointing out is that each panel operates on a 4 colour system. Red for the Ninth Circle and anger, yellow for Black Canary, green for Green Arrow and grey for the outside panels. This proves to be very powerful, the association creates dramatic sways when used in a pop-action book such as this.

Green Arrow #5 is a fun exhilarating ride that ends on an absolutely satisfying note that Percy and Ferreya execute very very well. Check out the previous five issues and this one, is not to be missed!

Thank you from Alex Knight