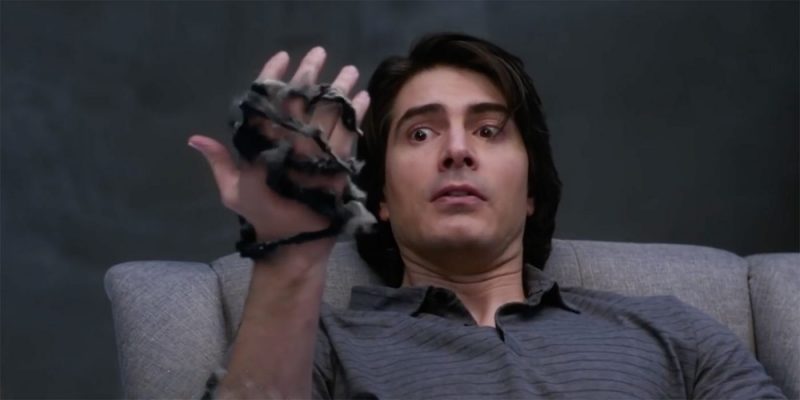 While Ray is worried about Nora, he is suddenly faced with his own problem that forces him to do the unthinkable. Nate and Zari are stuck in an awkward limbo, so Sara devises a plan to send them on an easy mission together. Charlie and Rory are approached with a lucrative offer that could upend their lives.

UNDER THE INFLUENCE (ELLE KING)

Following on from the previous episode, we are aware that Ray has been possessed in part by the demon Neron.  Here, he’s having an issue with his hands that have a mind of their own; a little sinister as they are intent on stabbing or smothering and they omit a fog that wraps itself around them.  Ray being Ray believes that science is the answer as to what is happening but Gary finds out that this is not the case and he is possessed.  Gary (being Gary) thinks he can exorcise the demon dressed as Constantine.  Oh dear.

We all know that Mick Rory is an erotic/romantic author, working under the pseudonym Rebecca Silvers.  Invited to attend a convention, that Charlie spots, they both attend as it means an easy £20000 earner.  Obviously, Mick looks nothing like a Rebecca Silvers so Charlie pretends to be her, with Mick giving her instruction on what to say.  Mona shows up as she loves a convention and spoils the show by trying to expose them both as being imposters.  However Mick goes out to prove that he is working under that pseudonym.

THE SET UP (OBIE TRICE)

Nate and Zari are sent on a mission (to retrieve a golden egg which turns out to be papier mache) by Sara in the hope that it will bring them closer together as they quite obviously have feelings for each other.  They realise it’s a set up and treat the mission as nothing more than a joke.  However, reality kicks in and the mission becomes more dangerous to them and they become aware that the mission for the golden egg is real.

Where is Constantine as he has been missing.  Turns out that he is on the hunt for a phoenix feather which will become part of the spell to hopefully bring Nora out of her coma.  It works and Nora spills the beans about Ray being possessed.  Ray must fight to keep Neron from taking him completely but when Nate turns up Ray starts to beat him.  Nate won’t steel up but Ray comes to a compromise with the demon.

LET’S TWIST IT UP (CHUBBY CHECKER)

Gary by no means helps the situation that we see the Legends up against and in a little twist we see a deal, a nipple and power.

A lot of great stuff in this episode with a “never saw it coming” twist involving the doormat that is Gary.  Not only that we did see some really character development for him, previously being the butt of jokes, the one who was constantly berated by his superiors and the Legends.  I won’t spoil it but man, it was such a revelation, with a genuinely shocking moment that was extremely well done.  Despite the usual humour from the Legends show, this season they have done the dramatic moments better than a lot of shows on TV at the moment.  Well-earned kudos to the writers.

Ray, despite being part possessed by Neron, still shows us the kind of man he is.  He has such a great heart that his compromise with Neron is nothing but heart-breaking; a man who in essence would rather give his own life than risk the hurt of others.

While the rest of the episode did not really have any effect on the wider season arc, we are still treated to some great character moments.  Sara and Ava get some time together to relax (ok so there’s an interruption), we find out more about Mick’s sensitive nature despite his rough exterior and Nora getting to work alongside the Time Bureau; a wonderful road to redemption.

Nate and Zari on an Indiana jones themed mission/date, right down to Zari’s dress.

Mick answering all his fan mail, seriously what a guy.

A dragon on the waverider?  Yes please.  Will the dragon be this year’s Beebo?

Expect the unexpected – really, just watch it and tell me what you see in the comments below, or on our social media pages.