Season Finale: Krypton – Episode 10 “The Alpha and The Omega” 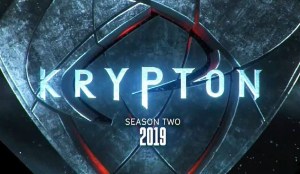 Krypton was definitely a show to pay attention to this summer! And the writers and creators are just getting started!! Season 3 of Krypton is going to blow Superman fans away! So many great things are set in place that will leave fans wanting more. So sad it has to wait until next year!!

Here’s a behind the scenes look to last week’s episode (ALERT: SPOILERS) and a small sneek into the finale:

Season Finale: The Alpha and The Omega

There are some notable parts of the finale which bring questions and start the guesses into what the next season will consist. And it seems it is going to be a dozy of a season 3.

As seen in the clip above, Wegthor is destroyed to stop Doomsday. Seg is able to get away in just enough time in a skimmer and returns to the rebel fleet. It looks to be that Doomsday is dead. But as any comic book reader knows, it just isn’t that easy. Especially when it comes to Doomsday.

Before the moon planet is destroyed, Adam and Val are involved in a cave-in under the planet’s surface. Val finds Adam and removes the plies of rock that have landed on him. But when Adam tries to get up, he cannot feel his legs. After getting him back to Krypton and into the outpost, Val puts together a device bracing his legs to help him walk, along with a jet back.

Nyssa tricks Adam into telling her the mechanics of the Zeta Beam. She takes it from him and uses it to go after Brainiac. But instead of landing on Rann to find Sardath, she is on a planet ruled by Darkseid. While Brainiac is on his way to Earth with Jor-El, whom he now calls his “son”.

The ultimate showdown occurs between Zod and his parents. And they take him down in hand-to-hand combat. Seg almost kills him before Lyta pleas for him to stop. Zod has become unconscious in the fight and is left in their mercy. To make sure he is stopped for good (or at least for the time being), they subject him to Black Mercy. Giving him the reality he wants: his parents proud of him and the conquering of Earth with a fleet of Sagitari soldiers.

But even before the fight begins, Seg says a great line from another El:

Supposedly from the news continuing from posts about the Snyder Cut of the Justice League the past few months, Darkseid was to appear in the movie. Will season 3 of Krypton be the first to bring this villain to life? What actor will portray him?

Will there be another Superman?

There are two parts to his question because there are two different scenarios. One: Brainiac is on his way to Earth with Jor-El. Is this before Superman even exists? Will Jor-El be Superman under Brainiac’s rule?

Two: Or does Brainiac go there in the future for the father and son to battle against each other?

In either scenerio, will there be another to wear the cape for television? The CW network with Supergirl and the network crossover episodes have theirs (especially with the crossover of Crisis on Infinite Earths this fall). Will SYFY Network have another? If so, who will become the next Superman?

The Great Battle of Season 3

Will the battle be over Earth, like it was for Krypton?

Darkseid is known to have a soft spot for the Blue Planet. And Brainiac wants it for his collection. It was even shown at the beginning of the season to be a part of it. But with everything that has occurred, was the future altered?

Seg is teaming with who now?

As in this season with a weird team-up Seg found with Brainiac, he is in another one with Lobo.

Lobo finally finds where Seg went to after disappearing and fleeing from him on the planet of Colu. They make an agreement with each other to help bring down Brainiac. But is Lobo the kind of person to keep his word in helping Seg get Jor-El back?