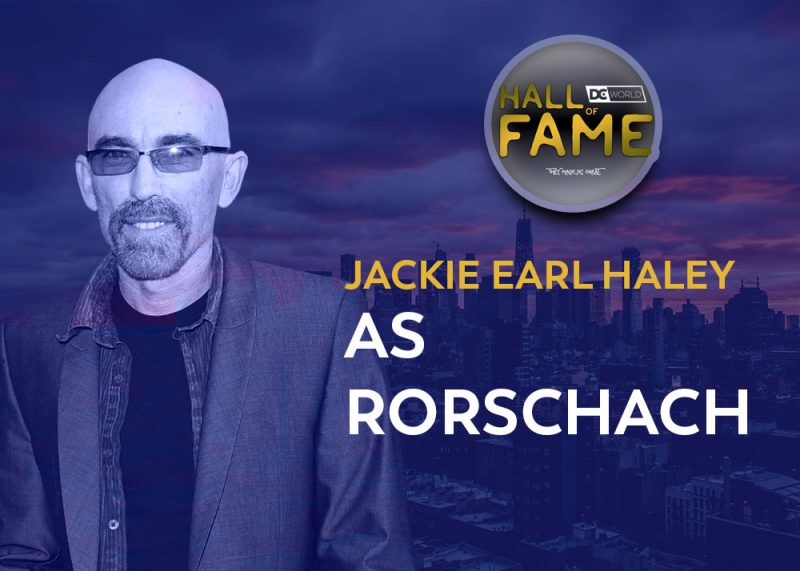 It’s that time of the month again, and we at DCWorld are launching the semi-final for September’s HOF chapter. Here is the fifth entrant for the September Hall of Fame, Jackie Earl Haley.

This city is afraid of me. I have seen its true face. The streets are extended gutters and the gutters are full of blood and when the drains finally scab over, all the vermin will drown. The accumulated filth of all their sex and murder will foam up about their waists and all the whores and politicians will look up and shout “Save us!”… and I’ll whisper “no.”

Jackie Earle Haley’s delivery of these lines alone, for me warrants his entry in to the DC World Hall of Fame. Many of Rorschach’s lines are particularly powerful points of the Watchmen comic and the 2009 film. This is why the actor chosen to play this anti-hero had to really grab the audience by the scruff of the neck and not let go until the films conclusion.

Jackie Earle Haley’s career had been reinvigorated after receiving an Oscar nomination for his performance in Little Children (2006) but it was Rorschach who really brought him back in to the Hollywood limelight. After reading online how people thought he would be ideal for the role, Haley, decided to film his own audition at home, in a costume he had made himself and sent it to the producers. Needless to say they, along with Director Zack Snyder were impressed and cast him in the role. Haley immersed himself in the role, learning everything there was to know about the character. This was worth the effort. Rorschach was the stand out performance in the film, impressive in itself and even more so considering the talent amongst the rest of the cast.

With DC having the likes of Batman, Superman and Wonder Woman it’s easy to forget that the Watchmen have their place in that world. The popularity of the film began to change that though and that is down, in part, to Jackie Earle Haley and what he achieved with Rorschach. The now famous changing ink blotches on his mask could quite easily have blended in to the rest of the film, but each scene featuring the masked detective or his civilian alter ego Walter Kovacs really stand out from the rest. His black and white attitude towards criminals and his brutal nature when taking them on were for me, what made the film so captivating.

Unlike other DC characters, this is the only on-screen version of Rorschach we have seen so we can’t compare him to others. However HBO have a Watchmen TV series in the works. It will have no links to the film, meaning new actors will be cast. Jackie Earle Haley certainly casts a big shadow as Rorschach and whoever the part goes to will have a lot to live up to.

Vote now to make sure that Walter Kovacs takes his place in the DC World Hall of Fame.

Are you a fan of Watchmen?  Do you think Jackie Earl Haley deserves to join Robin Lord-Taylor in the Hall of Fame final in December? You can vote in September’s Hall of Fame semi-final here.  Every vote counts so make sure you have your say!