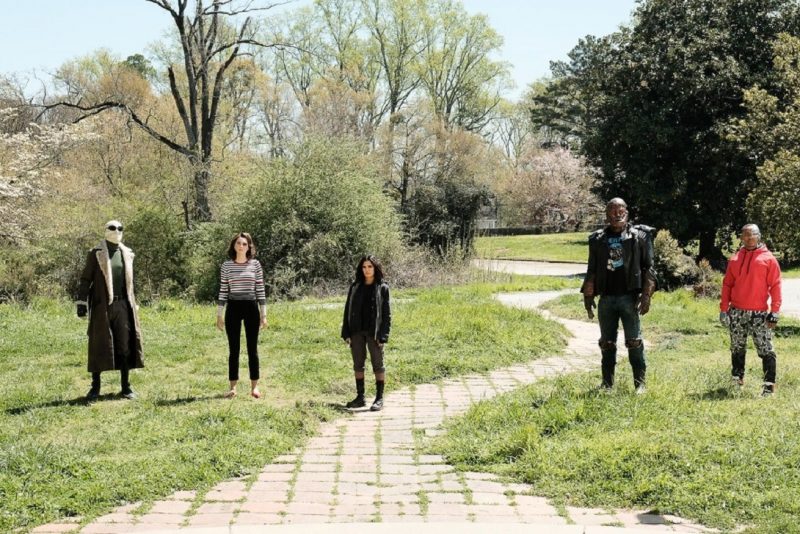 A tongue sandwich between Ezekiel the cockroach and Admiral Whiskers the rat. Gross? Illogical? Hilarious? Whatever your take on it, it happened! Just one example of the typically bonkers, yet typically brilliant goings on in the season finale of Doom Patrol. As part of a show that has constantly pushed the boundaries with its madcap excellence, this episode had a lot to live up to. Boy, did it deliver!

Picking up from last week’s jaw dropping revelation that Caulder was responsible for the accidents that gave each of of the team their powers, a time jump forward of six months occurs. Showcasing the team members in their new lives, none of them have seemingly moved on to better things. Even Rita, who on the face of it has strived to move on by way of becoming a drama teacher, is failing miserably due to her students almost bullying her. What I felt worked extremely well against these scenes was the masterful way they were juxtaposed with flashbacks showing Niles’ part in the creation of each of them. Far from altruistic, his initial cold, clinical frame of mind gradually thawed to something more benign, as the sense of his genuine affection for each member is shown, in particular during the 70’s set New Year’s Eve party. Against the back drop of his fun with Larry and Rita, duty comes a calling with the introduction of Jane into his life, and the conflict is tangible and real. Another acting masterclass from the wonderful Timothy Dalton.

Speaking of high level acting, the face off between Niles and Silas, in the aftermath of the accident that created Cyborg, is top drawer stuff. Silas’ stern examination of Niles’ methods and outlook really served to highlight the chasm between the two doctors and their ideologies, at least at that point in time. Any time Phil Morris and Dalton have shared a screen, the results have been electric, and I hope that season 2 (come on, just announce it already!) gives us plenty more of these exchanges.

With our disparate band of heroes reunited at Doom Manor to reluctantly help Niles rescue his daughter, it’s time for a another trip to Danny the Street. Sadly no Flex this time, but our favourite Beard Hunter makes another showstopping return, belting out some mournful karaoke. In a series that has had plenty of memorable guest characters, such as Willoughby Kipling, Animal-Vegetable-Mineral Man etc, Ernest Franklin has been a real highlight thanks to the performances of Tommi Snider. If this was his last hurrah, he has left a really big impression, not least on the levels of decency!

The final battle was a real mind bending and off the wall set piece. Typically of the show, the usual super-powered smackdown was shelved in favour of scenes that have to be seen to be believed. From Tudyk’s Mr Nobody sat on the porcelain throne bemoaning bad reviews for the show, to the giant leviathans getting their romance on, it was a crazy, hilarious sequence of events. You can enjoy the bestial smooch below, which bizarrely was part of our heroes’s masterplan to win the day. Don’t say I didn’t warn you.

A final scene introduced comic book favourite Dorothy Spinner to the mix, depicted as Caulder’s daughter and the reason the team was formed in the first place. His motivation being that he wished to extend his life to protect her, Spinner’s simian appearance in the comics would suggest that this version is the result of his tryst with Slava, the primitive lady from episode 10. The dynamic between the main players in season 2, should it exist, will be intriguing moving forward. Is Niles forgiven? How do they move forward from this point? Is Mr Nobody actually dead?

This series has been a privilege to watch and review. So different from anything else out there, it has constantly felt fresh and new. Intelligent viewing with a comical twist, it has been constantly inventive, fun, grotesque, adult and above all, the highest of high quality. If we don’t get that second season, these 15 episodes can stand alone as a crown jewel of the DC Universe canon. If we do get it, then we are all poised, ready to lap it up. Don’t fail us DC, or you may hear several cries of (in our best Cliff Steele voices), “What the f#ck?”……..