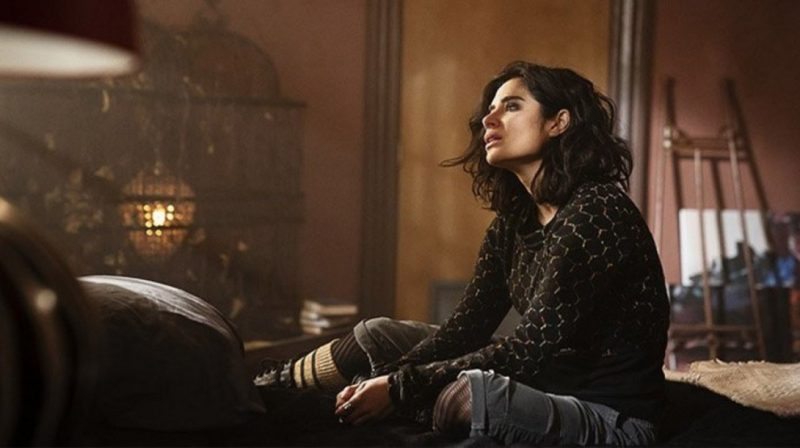 Despite the typically bonkers high concept of this week’s episode of Doom Patrol, there was a strangely straightforward air to “Jane Patrol”. Picking up where last week left off, with Crazy Jane in a catatonic state, post aborted wedding, her consciousness being literally dragged back into the Underground.

The Underground, for the uninitiated, is the the world in which all of Jane’s 64 personalities reside. All living in (dis)harmony in the subconscious of Jane (or should I say Kay Challis), each alternate being is brought “up there” when they take over her physical body. As Jane is not up top when Karen is dragged down, it results in the aforementioned catatonia. Seeing these personalities mostly given flesh in the form of different actresses was quite something, as it served to draw an even bigger line of distinction between them. Familiar “faces” and ones never before seen were all depicted, such as Hammerhead, Baby Doll, Penny Farthing, Jack Straw and Driver 8.

Living in such a dark, dank environment, symptomatic of Jane/Kay’s traumatic memories, highlights the tragedy of the character. The horrific childhood abuse suffered at the hands of her father casts a huge shadow over this plane of existence, and begs the question that despite a perceived victory over that memory towards the episode’s conclusion, where does she go from here? The ending of the episode certainly is full of ambiguity as to her true status.

The other character to get significant screen time this week was Cliff Steele, with the emphasis on Cliff rather than Robotman. Connected into Jane’s subconscious with the assistance of Larry’s negative spirit, his odyssey into that world is taken in the form of Cliff the man. Giving Brendan Fraser some physical screen time instead of him providing solely voice work was a nice move. Perfectly portraying the character’s sense of bemusement at the sheer craziness of the situation, laced with the usual steady stream of profanity provided the laughs. What provided the dramatic element was a real sense of the affection that Cliff has for Jane, stopping at nothing to try and bring her back from the abyss, both literally and figuratively. This is giving the character a slowburning arc, as the selfish, cheating NASCAR driver of episode 1 is being replaced by a selfless character that tries to do the right thing by others, no matter the cost. Probably, with the exception of Cyborg, the most heroic character on the show, Cliff genuinely cares for the others. The character, despite being a emotionless robotic shell, emits the most pathos and garners the most sympathy from the audience. In a team full of characters that have all suffered significant losses, he has lost the most. Huge credit must go to the perfect synergy of Fraser’s voicework and the physical movement of Riley Shanahan in the Robotman costume, a match truly made in heaven.

With Jane now rescued and to an certain point, restored, it will be interesting to now see how the show takes on the second half of the season. Despite Niles Caulder still being held captive by Mr Nobody, the last few episodes have seen the team sidetracked from their primary goal, which is to bring him back. Of course it has been highly entertaining and poignant to spend time with the likes of Danny the Street, the personalities of The Underground and Maura Lee Karupt, but a march towards the endgame wouldn’t be a bad thing. The resulting increased screen time for Timothy Dalton as The Chief and Alan Tudyk as Mr Nobody would serve to elevate the show to even greater heights than it already has reached.

Either way, this debut season has already given us so much to enjoy and sink our teeth into, we are spoilt. Where it goes from here remains to be seen, but one thing is for sure, it’s going to be one crazy ride for all concerned. So many questions have yet to be answered. Some haven’t even been asked yet, but I still want to know the answers! Whether a second season is ordered hasn’t yet been confirmed, but it will be a tragedy if we don’t get further seasons of this highly original and mindbending TV show.