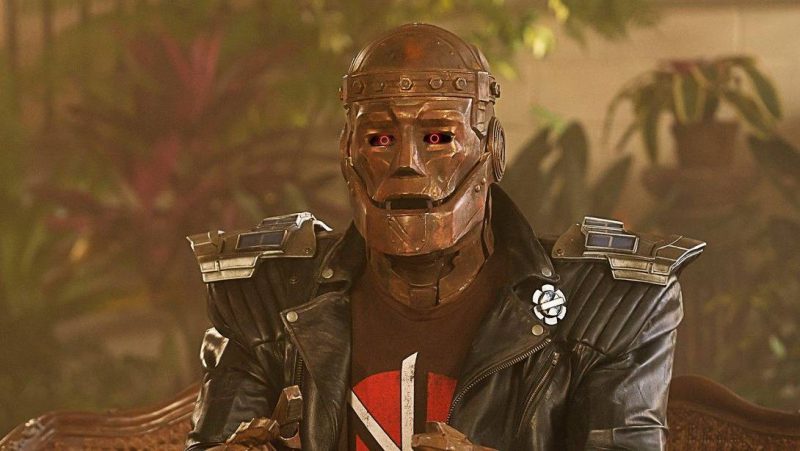 Therapy galore this week as our titular heroes were forced to revisit their individual pasts and deal with traumas. Throw in a vengeance seeking rat named Admiral Whiskers and all the elements were in place for another wild ride. Considering the crazy tone of the show, the poignancy and pathos were at an all time high this week, with relatively little comedic moments. With both Cliff and Vic getting the lion’s share of the screentime, the tragedy of these two mechanical men was laid out for all to see.

The clue is in the title this week, as our heroes’ team meeting devolves into an impromptu therapy session. Using the non-linear narrative that has been so well employed throughout the season, events from each character’s pasts are laid bare. Starting with Cyborg, who manages to override his programming that was previously put in place by his father, Silas. In doing so, he discovers that he has an online dating profile, set up pre-accident. Getting to grips with a Tinder-esque dating app brought the laughs but also a real sense of tragedy. Poor Vic is like any young man in this era, but his drastically altered appearance and celebrity superhero status massively impede his chances of romance. Joivan Wade excelled himself during these scenes, showing that beyond his stoic exterior, Vic Stone is a young man that is dealing with massive upheaval, the loss of his mother and his guilt over that, and trying to build a bridge with/make his father proud. Is Victor less maladjusted than his new found compatriots? Marginally so at best.

The centrepiece performance of the week though, was without doubt Brendan Fraser and Riley Shanahan as Robotman. Despite the fact that Cliff Steele’s robot face is expressionless, never changing, the sheer emotion emanating from it is astounding. It is quite amazing how the despair of the character is made apparent. The physicality of Shanahan and the voice work of Fraser work in perfect synergy every time the character appears on the screen. Cliff’s gradual breakdown was executed flawlessly, as the mind of a man trapped in a robotic shell, unable to experience any physical sensations, started to unravel. Fraser’s delivery was pitch perfect, the sheer desperation and frustration in his voice, laden with the usual selection of profanity, was heartbreaking at times. Driven to try and reunite with his estranged daughter, only to be denied by the realisation that it was a cruel trick of the mind, it was misery personified.

It wouldn’t be Doom Patrol without a twisted, dark sensibility, and this week’s serving came courtesy of the aforementioned Admiral Whiskers. Spurred to claim vengeance for the (accidental) death of his mother at the hands of our team, the rodent with revenge on his mind is revealed to be the architect of Cliff’s malaise. A rat in league with Mr Nobody. Sounds absurd, but within the context of the show it is the perfect fit of course.

Such a simple premise of an episode, but so much material mined. No real spoilers here of course, but plenty of great quality. Despite the content of this review, this wasn’t just the Vic and Cliff show. More of Larry’s struggles as a closeted homosexual in the 1960’s provided much of the emotional content too, as flashbacks to his childhood showed his struggles to fit in and have to deny his true self. Struggling with guilt over his self-perceived harm caused to others, coupled with his loneliness over the ensuing decades, Larry Trainor may be the most tragic character on the show, which is really saying something.

Overall, another high quality episode of Doom Patrol this week. I would like to see progression made next week with their quest to retrieve Niles Caulder, but this week time was a nice diversion of an episode. Every time the back story of a character is explored and expanded upon, then there is so much meat on the bone to be devoured. You have to know where you have been to know where you are going. Every week we are being given more and more backstory to enjoy, fleshing out these wonderfully twisted, tragic characters. Mature, complex and multi-layered storytelling at its best. Roll on next week’s episode…”Danny Patrol”.