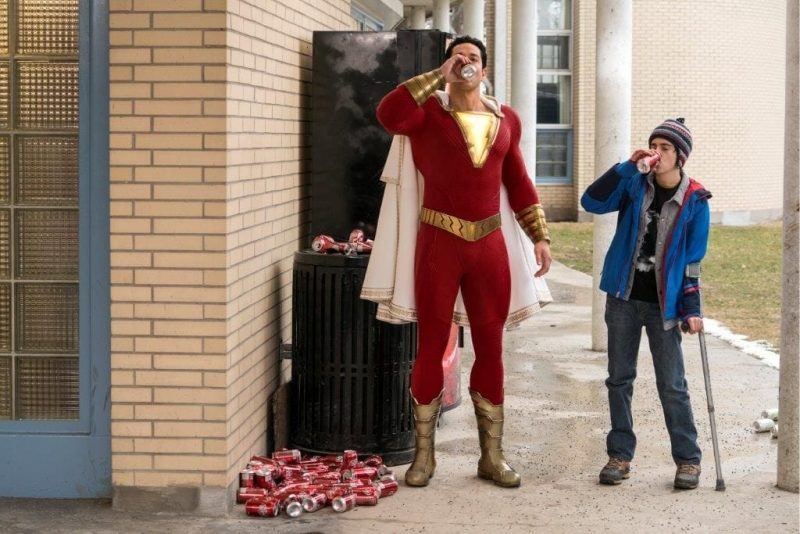 Kids want to grow up, while adults want to be younger. It’s the great irony of life that we always want to be something we aren’t, chasing something we think we want without realising we already have everything we need. It’s all part of a great journey of getting older and a fun concept to make a film out of.

Hollywood and audiences fell in love with the age swapping genre a long time ago, showing us hilarious stories about kids getting face to face with being an adult through magic and mystery.

To celebrate the Digital release of Shazam! Available to download today, we’ve pulled together our favourite age swapping movies.

Combining the star power of Matthew Perry and Zach Efron, 17 Again is a tale of a man (Mike O’Donnell) whose life has stalled after years of difficult choices, leaving him divorced and unemployed. After meeting a mystical janitor on a bridge (it’s a little less weird in the film) Mike is transformed back into his 17 year old self. Using his new found youth, Mike tries to fix the problems in his family, leading to a disastrous comedy of errors in which he learns that the choice he thought ruined his life, were best he made.

Back in the days when Lindsay Lohan dominated the cinema screen, we got Freaky Friday, as classic body swap film where mother and daughter trade places. Anna Coleman (Lindsay Lohan) and mother Tess (Jamie Lee Curtis) swap bodies after a mysterious incident with a fortune cookie, and learn to better understand each other. The film follows the ‘walk a mile in my shoes’ message, and provides a heartwarming tale about sympathy and understanding. A classic for those early 2000’s teens.

The progenitor of Freaky Friday, Vice Versa shows us what would happen if Judge Reinhold and Fred Savage swapped bodies. This involved an ancient skull stolen from a Buddhist monastery, which went touched swaps the bodies of father and son. These films were way weirder in the past, just stick with us. With both unable to act their age, we are left with a movie filled with underage drinking and actions at work that should have resulted in immediate unemployment. A must watch to see the bizarre beginning of this smash hit genre.

Baby Tom Hanks, the famous walking piano and the terrifying Zoltar can be found in this all time classic. Twelve year old Josh Baskin wants to be big and his wish is granted by the magical Zoltar machine in the least weird justification so far! Josh becomes 30 year old Tom Hank’s and uses his childish zest for life to live his dreams, getting a dream job and falling in love. But soon he learns that being ‘big’ isn’t easy, and longs to be 12 again so he can learn how to cope. Considered one of the great feel good films of the 80’s, Big is a movie that everyone should watch.

In the latest take on the genre, SHAZAM! features the story of Billy Batson (Asher Angel) moving to a new foster home in Philadelphia. Contending with a new family, bullies and trying to find his real mother. After being endowed with magical powers by an ancient wizard called Shazam, Billy discovers that by speaking the wizards name he can transform into the adult superhero (Zachary Levi). Immediately abusing his powers, as any 12 year old would, Billy uses his new abilities to buy beer and become a viral sensation. With being a superhero being the last thing he thinks of, Billy must learn to control his new powers and be the hero the city needs. Shazam offers audiences a highly entertaining vision of an all powerful superhero blundering their way to success, with a powerful message on the importance of find your family no matter where it may be.

Shazam! Is available to own on Digital Download now and on DVD, Blu-ray, 3D Blu-ray, and 4K Blu-ray from 12th August