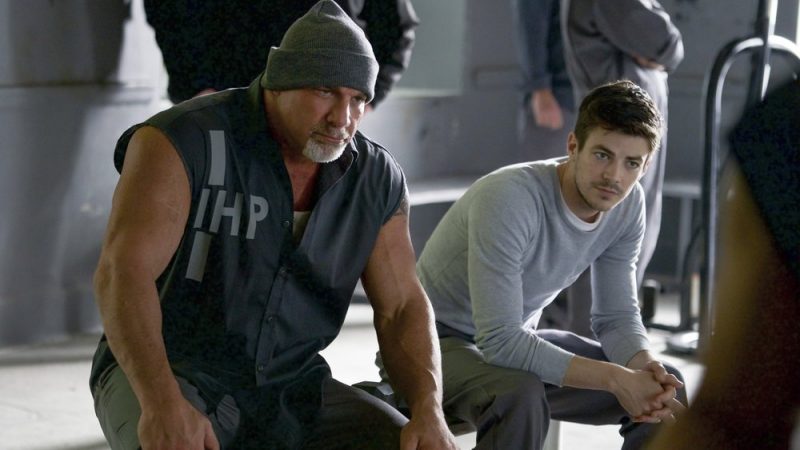 This episode contains pudding, super speed, an elongated chap, nostalgia, laughs, strange equations and… Goldberg, Goldberg, GOLDBERG! Ahem… sorry about that. Barry Allen may be behind bars, but you can’t keep a good man down. Yes, this episode is lighter on Flash content than most, but Barry Allen is a force to be reckoned with and still the main focus of the show. Ralph may have taken centre stage this week, but his growth as a hero is still down to the example set by his mentor. The writing this season, in particular the narrative surrounding character consistency, and development, has been superb; Barry has every reason to give up, but he doesn’t, Iris and the rest of team Flash are low, but still fighting the good fight, even the guest villain gets a new/old sidekick… but you may not have seen the episode yet, so I won’t spoil it for you.

While Ralph tackles the baddies on the streets of Central City, Barry isn’t lying idle… oh, no! Things in prison rapidly heat up for Mr. Allen, as he tangles with some rowdy inmates and gets introduced to Big Sir, played by WCW/WWE wrestling legend (and 2018 Hall Of Famer) Goldberg, Goldberg, GOLDBERG! Um, sorry… again. I must stop doing that. I have to say that the shake-up this season of giving the Flash a cerebral foe, as opposed to yet another evil speedster, has proven very refreshing. The writing is consistently good, and performances by every cast member have been stellar. Favourite lines from this episode include “What’s Kryptonite?”, “Beebo has an ouchie”, and “The family that slays together.” Classics, one and all. This was another action-packed, fun filled chapter in the adventures of the Fastest Man Alive. I look forward to next week, where maybe we’ll see another guest appearance from Goldberg, Goldberg, GOLDBERG! Nurse… I’d like my medication now, please. I think I need to go and have a lie-down. See you all next week.