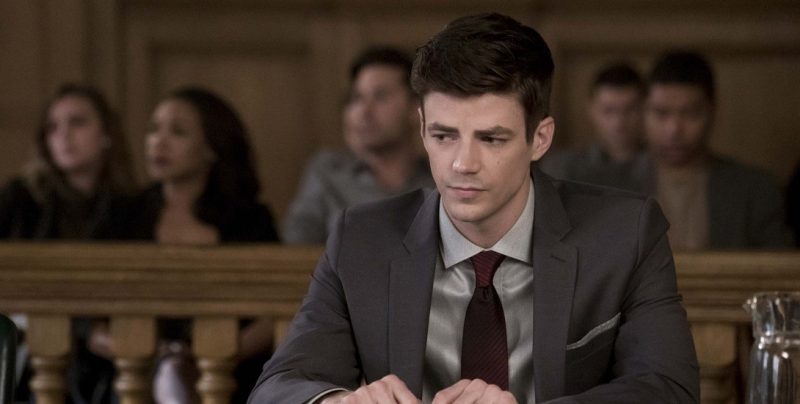 Barry Allen really is in trouble now! Usually it’s metahumans, super villains, or alien incursions. This time our hero is on trial for murder.

The Flash fought the law, and the law won.

When we last saw Barry and the rest of his S.T.A.R. Labs Flash Family, at the end of the first half of season 4, he was standing over the dead body of Clifford DeVoe, A.K.A. The Thinker.

Thanks CW/Sky One, nice cliffhanger… not!

After the mid-season break we see that the Scarlet Speedster’s fortunes haven’t improved. If anything he’s still in a frying pan, surrounded by radioactive fire!

Barry is not only contending with being on trial for murder, a new radioactive meta – dubbed Fallout – is loose in Central City, and people are dropping like flies.

DeVoe seems to have created the perfect frame up. The murder weapon, motive and manipulating the system seem to have left Flash without an escape. The only way out would be to reveal to the world his true identity, and put everyone he loves at risk.

The emotional content in this episode is as high as the action quota. Yes, this is a superhero show at heart, but what elevates it is how much we – as the audience – invest in the characters. Grant Gustin delivers another solid performance, and his stellar supporting cast follow suit.

The episode really shows the villain’s level of brilliance, and his wife’s blind allegiance. Joe West and all of Barry’s back-up would do anything to help their friend, which leads to some morally dubious decisions being made. We all know of Ralph Dibney’s questionable past, but in this instalment his journey to hero status takes another firm step in the right direction.

The Flash is back, baby! I can’t wait to see how the rest of the season plays out.