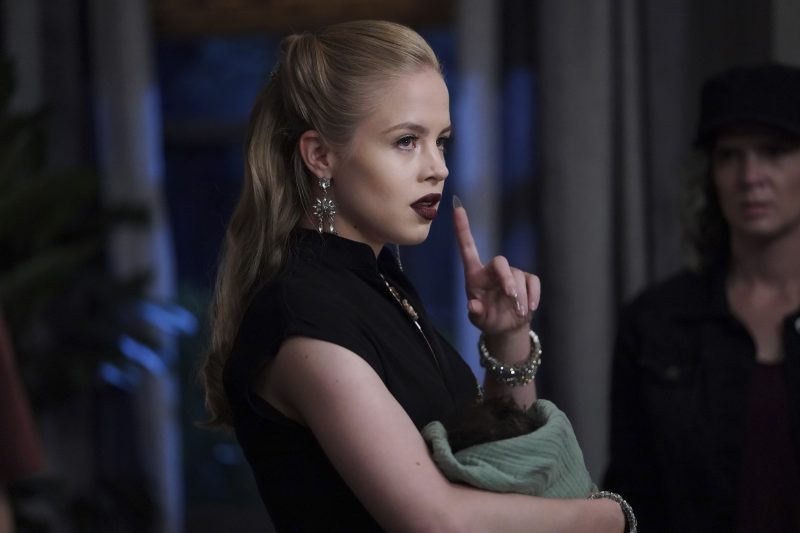 As the episode begins, we are introduced to a new strong character that goes by the name of Looker. As she holds a small meeting with her followers, it’s clear that she has some sort of hold over them. It’s made clear that she  was also controlling Deacon, who Anissa tried to save in the last episode. As Anissa tried to look for Aniya in the last episode she was met on the road by a sheriff who had some sort of Meta power. She quickly realised that something was going on in this town.

We see Anissa track down Aniya’s family in the south of Freeland in the woods. We quickly learn that the community is split into two categories, the san-jay and the perdi. Looker has a mighty hold and I feel she is going to be a strong villain throughout the next few episodes. After Aniya learns the news that Deacon has died, this triggers her labour and she gives birth to twins, however one is black and the other is white. This confirming that Deacon wasn’t actually just her boyfriend but he is the father, her parents aren’t thrilled with the outcome and refused to hold the white baby. Anissa wants to get to the bottom of this and why they are so ashamed of the baby. Anaya tells Anissa that Looker had come and taken control of the white people (named the San-Jay) splitting them from the black people in south Freeland. Her power is in the form of a silver liquid which pours from the bodies that she controls, we also saw this leaking from Deacon’s face when he died. This silver liquid also shined in the babies eyes; this is how she controls people.  Anaya tells Anissa her fear of looker and that if she finds out about the two babies, they would be in danger as looker wants to keep the two groups of people separate. Anissa decides that the only way is to leave the property and get to a safe place.

We then see Gambi who is very much alive track down his assassin and tries to find out from him who his employer was. After torturing him, he only learns that he was paid online to kill Gambi but didn’t have a name, Gambi then shoots him and leaves his house. We then see Jefferson help Anissa get the family out of the woods away from Lookers people. As they start to leave, Gambi sends in a drone equipped with a gun and helps Jefferson defeat the new kids on the block. However Jefferson doesn’t realise the drone is there and therefore doesn’t know that Gambi is right by his side and alive. We also learn that looker first came to the town around 30 years ago, it’s possible that she was part of the same experiment that turned Jefferson into black lighting. After the attack, looker intercepted the black baby and the white baby made it safely out. However looker is angered by the realisation of twins as she learns that the baby’s father was one of her san-jay and it had a sibling.

We then cut to the reverend Holt, who has realised that Tobias had involvement in the generous donation to get the clinic moved. He therefore refused to accept and he wanted no part with Tobias. After Tobias is informed of this, he is angered and orders Khalil to kill him but Khalil tries to talk him out of it as his Mom visits his church. Khali confides in Jennifer about Tobias reign and she tells him that he had made too many bad mistakes and she wants him to make the right decison from now on.  When Khalil finds Holt he tells him that he needs to leave Freeland as he isn’t safe, Holt tells him he’s not going anywhere and there’s still time to save Khalil with Jesus. Khalil leaves him and disappears back to Tobias and tells him, he couldn’t do it as there were too many people there. Obviously we know this isn’t true. As Tobias hears this news, you can see the anger upon his face; he decided it’s time to teach Kahlil a lesson and starts to take his rings and jacket off. As Tobias attacks Khalil from behind, it seems Khalil was ready and lands a powerful blow and Tobias stumbles from him. However the fight continues and Khalil ends up lying on the floor bruised and bleeding.

We also see Lynn become fragile after the death of the 14 pod kids, Jennifer tried to comfort her but actually makes things worse and Lynn continues to drown her sorrows with whisky. Jennifer then sees Khalil make an appearance at her window again but he is reluctant to look at her. Jennifer demands that he comes up to see and she sees how beaten up he is. Jennifer learns that Khalil has questioned his loyalty with Tobias and says that he is going away, however I don’t believe he will leave Jennifer like this as they are growing together day by day.