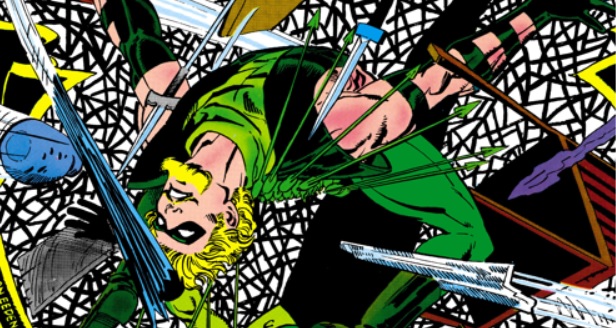 Title: A Slight Case of Vertigo

Continuing on from the previous issues’ explosive ending, Oliver Queen is now the president of Horton Chemical, as was the last will of Abby Horton, the former president of the company, now deceased. Oliver struggles to find his place as a rich man once again after the island taught him how to survive and love life without the struggles and manipulative grasp of money, but his mind isn’t entirely in the right place as he becomes lost in thought about why Abby changed her will to include him with more than she ever left any of her family members.

In the last issue, Oliver is targeted by a hired goon who meets his own demise before he is able to tell Green Arrow who hired him, which leads Oliver to become very wary about his surroundings in case of any more unexpected traps, as well as leading him to believe that Abby’s death was no accident. In the day he must do his best to retain his position as president of Horton Chemicals, but by night, he has other means of finding information.

This issue contains a lot more excitement than the previous one, as there’s added mystery built up throughout the pages, leading the arrival of an old foe. For anyone who knows Green Arrow, it can’t be considered a spoiler to reveal one of the villains here can it? I mean it’s in the title of the story. That’s right, the foe known as Count Vertigo makes his appearance as Green Arrows first rogue to appear in this miniseries, which is always exciting because Vertigo’s abilities always prove troublesome for the Emerald Archer.

Count Vertigo in ‘A Slight Case of Vertigo’

We get to see some of Green Arrow’s trick arrows such as the ‘Feedback Arrow’ which can detect technology such as bugs in a phone or answering machine, as well as be used to track technology from a distance, acting like a homing arrow of sorts. We also get to see G.A. use the ‘Foam Arrow’ which he uses to liquefy locking mechanisms in order to unlock doors, which is especially useful for breaking and entering into secure buildings.

Oliver shows us a different side to himself, as we watch him toy with the suspects, who are all related to the victim, as he falsely tells each one separately that he has discovered who the killer is, in order to get a rise out of one of them to really find out who it is. This shows a Batman-like quality in him as it proves that he isn’t afraid to hit a little close to home in order to get what he needs, but at the same time, he comments on the fact that Batman would search for clues, whereas he had a quicker plan.

The colour palette for this issue includes a lot of greens, yellows and reds throughout the entire book, with a lot of the yellow primarily used for Oliver’s hair and goatee, which makes these features stand out from the panels he’s in, ensuring that the readers focus is on the hero of the story.

Overall, it’s another great issue to the series and a thrilling plot to read as we travel with Oliver and his alter ego through this very personal story that tugs at the heartstrings, keeps you guessing at the mystery and of course excites you with the action.