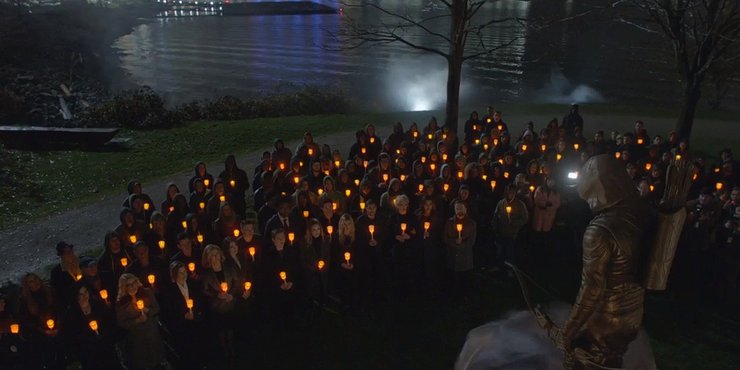 Eight years of my life have been dedicated to this series and now the time has come to say goodbye. Rather than just a review, I would like to talk a little bit about what this show has meant to me, as well as what it has meant for comic book television.

Arrow first aired back in 2012 and honestly, I had only read a couple of Green Arrow stories, but the character was already one of my favourites because as I have mentioned previously on twitter, he has the Robin Hood aspect to him which appealed to me as someone who was born in Nottingham and brought up on stories of Robin Hood. The green hood and the archery are a match made in heaven and so to find a comic book character like Robin Hood with a Batman vibe, was a dream come true. I was so hyped for the series to start and when it did, I was hooked from episode one. The wait for the next episode each week was a pain because I just wanted more, but every time, the wait was worth it.

This episode takes us back through Oliver’s life with flashbacks to 2012, in the early days of his vigilante life where the enemies were nothing more than names on a list, soon to be used as target practice for ‘The Hood’ who showed no mercy with his aim. It reminds us of the key moments in Oliver’s evolution to become who he was just before his death, such as Diggle being the one to change Oli’s mind about killing those he goes up against.

It also gives us a look at the world that his sacrifice created, with the return of so many characters that have come and gone along the journey of Arrow, who now owe their existence to the man they thought they knew. Some of the characters struggle with the thought of alternate worlds, whilst others are simply happy to be there in the end.

Mia returns to what is the present for us but the past to her, in order to attend her father’s funeral. She meets people that knew her father, and better yet, she shows them all that she is a worthy successor to her father’s legacy, though I think it’s safe to say none of them ever doubted that fact except for Mia herself.

Speaking of returning, the Olicity fans will be pleased to hear that Felicity Smoak returns in this episode to bid farewell to Oliver, say hello to her daughter, and reminisce the past with old friends. The team that Oliver brought together over the years gather around to witness Felicity working away on a computer in the bunker, doing what she does best to help the team be successful in their mission. The scene itself is a legacy shot of Arrow over the years which beautifully binds the memories into a single frame which brings a tear of joy and warms the heart to witness. 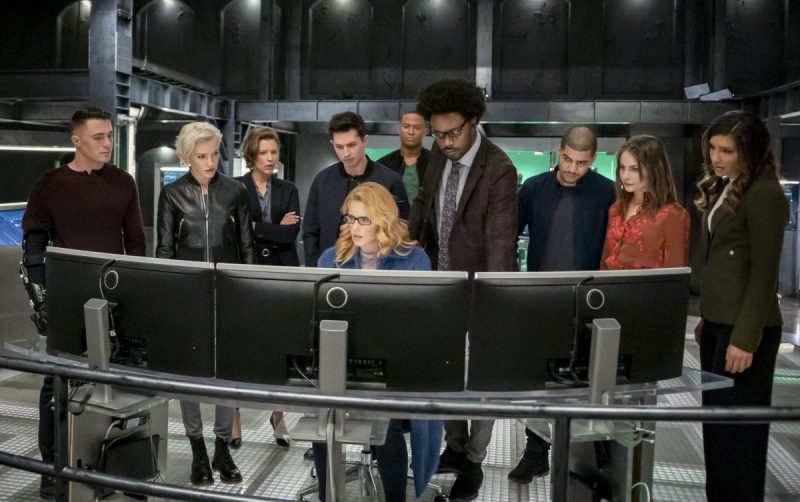 The speeches given in this episode are truly emotional, as those closest to Oliver remind us of the journey they’ve been through, that we as an audience have witnessed and journeyed through with them, because eight years isn’t something to be taken lightly. Sure it’s not as long as many other shows out there, but it’s enough to grow attached to these characters and to feel apart of their lives. As daft as it sounds, that’s how I’ve felt for a lot of Arrow. I knew a few friends who started the show back in 2012 but stopped around season three or four, and so when I tell them about what’s happened in later seasons, they don’t fully understand or appreciate the concept of why it’s so exciting, emotional, or frustrating, because they haven’t engrossed themselves into that world, and bonded with certain characters, or watched the original characters evolve into someone almost unrecognizable from their original appearance. A viewer like myself, who has watched the show since day one and stuck with it through thick and thin, gets drawn into the world and feels like they are apart of it. You want to be there to tell the characters that it’s okay, or that they should listen to the other character because they know what they’re talking about etc.

This episode brought tears to my eyes because I have been apart of this journey as a viewer, and it’s hard to watch a show you have loved so dearly, to end with such tragedy, even with the knowledge of the legacy that it leaves for the remaining characters. For example, Oliver Queen’s daughter Mia, portrayed by the badass beauty that is Katherine McNamara, will be starring in her own spinoff series, alongside the also beautiful badasses known as Katie Cassidy and Juliana Harkavy, in ‘Green Arrow and the Canaries’. If you want an idea of what this show will be like, then watch the previous episode (episode 9) of this season of Arrow as the episode set out to be a test pilot for the spinoff, to generate a sense of what it will be like without Oliver, and honestly, I’m excited.

Arrow pretty much started out like any other comic book show, but what it did for the genre was beyond what others in the past had ever dreamed of doing. Arrow started a universe, one which saw many DC heroes come to life and become household names to new audiences with names like Barry Allen being recognized by people who had never read a comic book in their life. The Flash, Supergirl, Legends of Tomorrow, Batwoman, Black Lightning and more that are yet to come, were all made possible because of Arrow, and the best part was that they not only spawned from the show, but they were a part of the show, with yearly crossover events that saw all of these characters join together to fight a larger force that was too big for just the one series to take on. This show gave us a fully working multiverse which not only connected the shows in what we now call the ‘Arrowverse’, but also shows and films from the past such as Smallville, Batman (1966 TV Series + 1989 film), Birds of Prey (2003), Justice League (2017) and more. It’s something no other franchise has ever done and so for that, Arrow will always be a staple of the comic book media.

Of course, all of this talk about the show, and I seem to have let one name slip this entire time. Stephen Amell, the man beneath the hood and behind the mask, is the hero we all deserved. Not only did he become an iconic portrayal on the show, but he also showed us the hero he is outside of the show as well. Raising money for charity, using his fame as a comic book hero to reach a wider audience to help those less fortunate, and becoming a real life hero to so many people. He taught us that we are all heroes if we choose to be, and that we can all do some good in the world if we want to be just like Green Arrow, because as we know, Green Arrow looks out for the little guy. It’s not about changing the world in a day, it’s about doing something small that means a lot to someone else. Amell is an inspiration both on and off screen, with appearances of WWE and American Ninja Warrior, which both earned him money for charity purposes, he is one name that should not be forgotten. I only hope that one day we’ll see him don the hood again, even if it’s just for a cameo appearance, because he brought one of my favourite comic book heroes to life, and gave me a new perspective on said character that changed how I saw heroes.

Overall there is a lot to be said about this finale, this series and this legacy, so I will end it on this. Whether you loved Arrow, hated it, or thought it was merely okay, you cannot deny what this show, what the cast, crew, and anyone involved in the eight years of this series, has done for the future of comic book media, whether that be the books themselves, the shows or the films, this series has changed the future and it will forever be remembered for doing so. I for one have enjoyed almost every minute of Arrow, and will always go back to my blu-ray collection to binge watch the entire eight seasons, especially during the weeks in which I have to wait for new episodes of the other shows to come air.

Thank you to all of the cast who have brought the characters out from the pages. Thank you to all of the crew who worked so hard to bring us a roller coaster of emotions, stories, plot twists and more each week. Thank you to all the fans who I have met along the way for sharing in the passion I have for the show. Lastly, Thank You to DC World for allowing me the opportunity to write this final season’s reviews for them, because I get to share my passion and thoughts with a wider audience. My passion for this show and for this character is what led me here, so if I can achieve that with Arrow, I can’t wait to see what the future holds with other shows just like it.