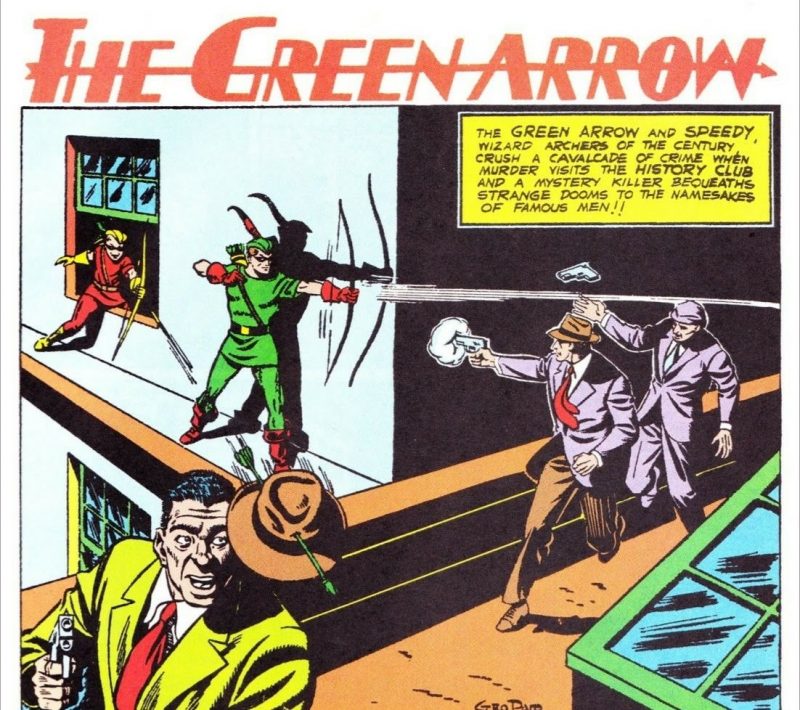 Title: The Green Arrow in ‘Case of the Namesake Murders’

Oliver Queen a.k.a The Green Arrow, first appeared in More Fun Comics #73 in 1941, the same year and the same issue as the introduction of Aquaman and Dr. Fate, who are two of DC’s biggest stars to date. During this time, DC was becoming worried that characters like Batman were selling fewer copies and that the audiences might be growing bored of the same heroes every week, so they ordered the creators to come up with some new ideas for new heroes who could captivate audiences and keep the comics business running.

Mort Weisinger and George Papp came up with the idea to create a character similar to Batman, a rich, powerless muggle with a young sidekick to help, and with a little help from historical inspiration known as Robin Hood, the pair came up with the character of The Green Arrow and his sidekick Speedy, who were master archers and used a quiver full of arrows to stop the bad guys, as well as their trusty Batmobile…i mean…automobile which weirdly enough they called the Arrowplane, despite not being able to fly.

Back in the 40’s the comics, no matter what character it focused on, were all very bright, with vibrant colours that allowed each character, background and panel stand out from one another. Green Arrows first costume was a green tunic and trousers, with bright red boots and gloves, and a green hat not too dissimilar to that of Robin Hood in the film The Adventures of Robin Hood (1938) starring Errol Flynn as the leading character whose portrayal was clearly one of the biggest inspirations to the character from the costume to the goatee. Speedy’s costume was bright red where Oliver’s was Green, with a yellow hat, gloves and boots, as Speedy would represent the Will Scarlett character of the film who was portrayed by Patric Knowles. Together, these two highly trained archers in their coloured attire, really jump out of the pages and demand your attention when they appear in any of the panels.

The story itself is fairly straightforward with a classic mystery man on the loose killing certain victims, but the victims all share names with historical figures and so the antagonist kills them by similar methods in which the original figures died, such as the character George Lincoln, being shot in the back of the head just like Abraham Lincoln. You get the picture.

There’s plenty of chase scenes and scenes that in this modern age would be much more graphic but due to restrictions in comics, artists back then weren’t really allowed to draw gory scenes with blood etc, so George Lincoln getting shot in the head is drawn without an exit wound or a splatter of blood.

This issue also contains plenty of puns and witty one liners as many characters used back in the day, which is where a lot of people get the idea that superheroes are nothing more than ‘funny books’, but comparing this to modern age comics, you see a complete shift in tone with darker art styles and plenty of hard hitting story lines, which I’ll go into more during my reviews of the Green Arrow catalogue of comics, but here in this issue, the heroes seem to be having fun, and enjoying what they do, which as a reader, allows you to be entertained by the hero’s journey.

Overall this quick introduction to Green Arrow shows the history of how it all began, with a Batman/Robin Hood mashup character, who for much of his early life spent his time as nothing more than a guest appearance in other characters’ stories, but little did they know back then that he would go on to become one of the most influential and important characters in the DC universe.

By the way, one of the oddest things to see in this comic as a modern reader, is the fact that in the end of the story during the final panels, there is a car chase scene between Green Arrow & Speedy and the villain, which ends with Oli shooting one of the villains tires with an arrow, causing the car to swerve off a bridge and crumple head first onto a rock below, but the funniest thing is, there’s no mention of whether the villain is in prison after that or not, so it appears that in this story at least, Green Arrow just straight up murdered the villain and made it look like an accident!